Plastic pollution in the Philippines is omnipresent – but how exactly does it affect riverine and marine life, fishing communities, and human health?
August, 6, 2019, Maryjane, Ruth Giselle, Carla Mae, Pirmin, Sabine 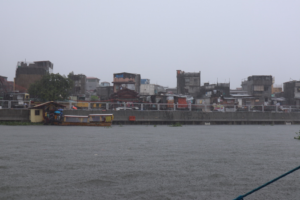 Today’s world’s unrestrained hunger for plastic sets new records annually. Every year we produce around 300 million tons of plastic, most of it single-use. Furthermore, 8 million tons of plastic are dumped into our oceans each year, affecting the environment and its inhabitants [1]. Indeed, people not only suffer from the socio-economic, but also from the health-related consequences of the issue. Thus, in this article, we will discuss the multidimensional impacts of plastic pollution in the Philippines.

Nature, health, and plastic
Shocking pictures showing turtles and whales stuck in plastic bags demonstrate the extent to which marine animals are negatively affected by plastic trash in the sea. Moreover, microplastics enter the food chain and can be found in the fish we consume. The biodiversity is also in danger, as over 200 species are affected by plastic pollution and the toxins released by plastic degradation [2]: Fish reproduce less, an issue also impacting fishing companies and the economy. Besides that, waste drifted on land is not just an esthetic problem, but also a safety one, as sharp objects found in garbage could injure the people living on the coast.

Not only does plastic pollution affect our environment and its flora and fauna, but it also endangers human health. Since we, humans, are at the end of the food chain, the accumulation of microplastic in marine life (biomagnification) represents a serious health problem – especially in communities living near rivers or coasts. Research has shown that various monomers and additives in plastics, such as Bisphenol A and Phthalates, are harmful to our health. Bisphenol A mimics estrogen and therefore affects the endocrine system. It for example increases the risk of several cancers, such as breast cancer and ovarian cancer. Phthalates can have similar effects but are overall less harmful than Bisphenol A. Luckily, up to 90 per cent of the dietary uptake of those substances is being excreted via feces [3].

The effects on human health are not only physical, but also mental: Living beside a polluted river or beach, where one cannot go swimming and wash oneself can be a burden. The Pasig River in Manila for example – which connects Manila Bay and Laguna de Bay – was declared biologically dead in the 90s by ecologists [4]. During our excursion on the river, we did not observe the pollution, as it was 20 years ago, but we did witness people throwing their garbage into the river and industrial waste flowing into it. According to our informants, aquatic life has nowadays returned to the river [5].

Fishing and tourism
Besides that, the single-use plastic items floating on rivers tangle the propellers of fishing boats and are caught by fishing equipment. This results in the need to often repair and change the fishing gear. However, the marine litter is not only comprised of single-use plastic. It also includes fishing nets that were left or lost in the sea and that are still drifting and catching different species (a phenomenon known as ghost fishing)[2]. This can in turn lessen the amount of commercially sold fish [2].

Moreover, the plastic pollution problem extends its negative effects to the economic income generated by tourism. In the Philippines, this became evident when Boracay Island, a popular destination, was closed for six months due to cleaning operations. According to the country’s chief economist, an estimated Php 1.96 billion will be lost, but will be compensated by the other tourist spots in the Philippines. However, private stakeholders estimated a loss exceeding Php 50 billion [6]. Indeed, big and small establishments alike were shut down and the people getting their income from the booming tourism in Boracay had nothing else to rely on. Thus, many people suffered from the abrupt closure of the island and more than 30’000 workers had to be displaced [7].

Plastic use in households
It is important to consider the plastic-related behavior of people living in riverine and coastal communities, as it also contributes to the problem. This is most significant in urban areas, where a lot of plastic waste is generated. Research has shown that the Philippines is one of the most plastic polluting countries, most of its waste coming from the rivers in urban areas. Since there is a large number of informal settlers living in riverbanks, it is difficult to treat the amount of waste in the rivers [8], one of these being the previously mentioned Pasig River. Indeed, research deems the problem as “mismanaged” [9]. In addition, the sachet culture appears to be one of the main causes of plastic waste in riverine and coastal areas [10].

Agencies and waste management
Different interventions from government agencies and private organizations have been implemented in order to help the people in their current situation. One example is the Metropolitan Manila Development Authority (MMDA) and their projects in ferry services, Pasig River clean-up, etc. [5] What is more, other government agencies such as the Department of Science and Technology (DOST), the Department of Tourism (DOT), and the Department of Health (DOH) collaborated to help reduce plastic pollution and treat the water in different riverine and coastal communities [5].

The Department of Environment and Natural Resources (DENR) is currently implementing the nationwide Coastal Resource Management Project Program, which mandated the Local Government Units (LGUs) to follow the provincial environmental code which includes waste management. Certain parts of the Philippines such as Negros Oriental, Bohol, Cebu, etc. had already implemented different workshops focusing on limiting the coastal access and educating the people to stop their destructive practices to marine life [11] [8]. One example of the many private organizations is the program “Save the Waters, Save the Sea“, which increases community awareness of the value of local coastal resources and the damage that pollution is doing to coastal and marine habitats [8].The most recent activity in the reduction of plastic pollution was last July 2019, when the US government awarded grants to LGUs to help them reduce plastic pollution in the Philippines Ocean [12].

Everybody should be concerned – and be part of the solution
The plastic pollution affecting riverine and coastal communities is a multidimensional issue. Therefore, in order to find a long-term solution, it is fundamental to deal with it in an interdisciplinary way, including the domains of economics, politics, health, environment, and society. A general guide for all the domains could be the 5R approach: Reduce, Reuse, Recycle, Recover and Redesign [3]. These principles need to be integrated not only into everyone‘s way of thinking, but also into companies’ overall concepts and into LGUs. Everyone‘s contribution is needed in order to create a significant change.