“We estimate that the streetwear market is a $50 billion global opportunity, driven by trends such as casualization, social influence, and self-expression. Supreme sits at the epicentre as the original category leader.” – Steve Rendle, CEO VF 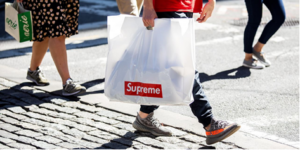 VF Corp. stocks jumped as much as 17% after agreeing to acquire a top player in the streetwear space, Supreme, reaching the highest valuation in the latest 33 years. The all-cash deal is expected to be completed by year-end and it will result to be VF’s largest takeover since the acquisition of Timberland in 2011 for $2.3B. This move reflects the management bullishness on the streetwear market in the longer-term, a market that is estimated to be worth $50 billion, and the Supreme’s leadership role in this space. The leadership position appears to be confirmed by almost 80 percent of global consumers, that in a recent survey described Supreme as the brand that represented streetwear to them the most, preceding labels such as Nike and O-White (Strategy&). With only 11 stores that are open once a week and an online shop, Supreme built its solid reputation as a hyper-exclusive niche brand, but without the need of sacrificing returns and achieving best-in-class profitability. With gross margins that are over 60% and operating margins that are 20%, VF will add to its portfolio a DTC company that will presumably boost its E-Commerce, a segment of crucial importance especially in the midst of the pandemic.

The white and bold lettering enclosed in a red box logo is what made Supreme so iconic. Established in 1994 as skatewear, the company of James Jebbia pioneered a business model focused on scarcity, evolving into what is now one of the most-desirable brands among fashion aficionados. What is special about Supreme is that supply is kept at a low level so that demand significantly outweighs it. As demand increases, the supply becomes more and more valuable following the simplest principles of microeconomics. However, Supreme never re-stocks anything, meaning that if you missed the train on a product, that is gone forever. This is at the heart of the concept of limited edition that Supreme executives have decided to embrace. Being valued only $1B three years ago, Supreme’s worth more than doubled under the control of The Carlyle Group, which acquired a 50% stake in October 2017. This reflects its strong evolution in revenues in recent years. In fact, The New York-based company currently generates more than half a billion in yearly sales, up from a mere $200M in 2017. Taking a closer look at Carlyle’s billion-dollar bet on Supreme, the private equity giant’s move in the fashion industry seems to fall within the scope of a strategy aimed at scaling growth from companies operating in the market of selling high-end goods to young consumers. For instance, Golden Goose, an Italian company famous for its luxury sneakers, has expanded from 7 stores with around €100M in revenue and €32M EBITDA to 90 stores generating around €260M in revenue and an €80M EBITDA under the control of Carlyle. This highlights their undisputed ability to unlock the potential of rough diamonds in the fashion industry. That being said, Supreme’s growth does not seem destined to stop. VF executives believe that it will open up revenue growth of 8-10% in the upcoming 5 years. Besides, they believe that Supreme would be “modestly accretive” to its fisical 2021 results, and contribute a minimum of $500 million in revenue and $0.20 in non-GAAP (adjusted) EPS the following fiscal year.

VF Corporation is an American worldwide apparel and footwear company founded in 1899 and headquartered in Denver, Colorado. Throughout its history, it engaged in several mergers and acquisitions such as that of Blue Bell Holding Company for $762 million in the 1980s, which made VF one of the two largest jeans makers in the world at the time. In the 2000s they acquired brands such as Eastpak, The North Face, Timberland and merged with Vans, becoming one of the biggest market players in the fashion industry worldwide, with a market cap of more than $34B (as of 07/12/2020). Despite being strongly hit by the COVID-19 storm, VF still managed to record a TTM Revenue of $8.94B and a TTM EBITDA of $485’370M. The acquisition of Supreme is part of a growth context whose long-term strategy is focused on drivers such as the elevation of direct channels and the acceleration of a consumer-minded, hyper-digital business model transformation. In an environment of exposure to extreme volatility as that we are living now, prioritizing e-commerce becomes imperative. In the year ended March 2020 e-commerce represented only 28% of VF’s DTC business and via this acquisition it will likely further increase.

State of the Industry – Fashion

It comes as no surprise that the COVID-19 pandemic has been devastating for the fashion industry worldwide, with almost three-quarters of listed companies losing money. According to a recent McKinsey report, the industry’s economic profit will decrease by 93 percent in 2020 after riding a positive trend of sustained growth (Exhibit 1). Fashion companies heavily relying on physical retail stores have been among the hardest hit by the pandemic. Retail has been in a downward spiral for many years and the recent crisis further exacerbated the sufferings, increasingly forcing fashion executives to redesign their business model. Under the pressure of lower ROI at the store level, Inditex, to cite one, has decided to permanently shut as many as 1’200 physical stores, pivoting more aggressively towards online selling. 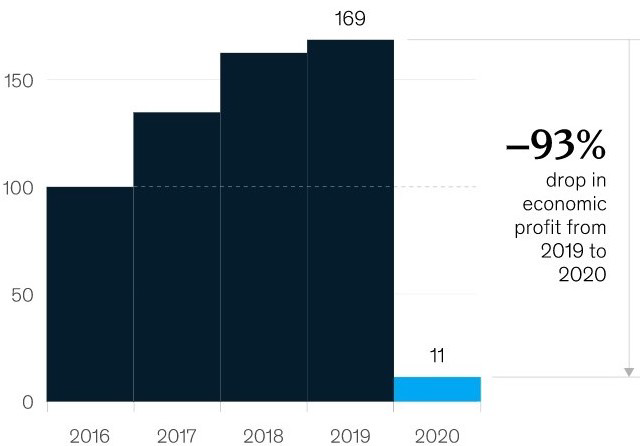 The Spanish holding that controls brands of the calibre of Zara, Massimo Dutti, and Bershka is also planning to accompany this closure with more than $1.1B on digital investments over the next three years. The same fate awaits many other companies: according to a UBS analysis across the U.S. retail industry, around 100’000 stores could shut down over the upcoming five years, more than three times the number that closed during the 2007-09 economic crisis. In such a cloudy economic outlook there are however some silver linings. With unprecedented home confinement dictated by the virus, the digital shift towards e-commerce became essential. Over a period of just eight months, the portion of e-commerce fashion sales almost doubled from 16 percent to 29 percent globally, a leap forward of six years of growth. Traditional online market players such as Zalando or Farfetch recorded extraordinary profits and were the clear winners of this circumstantial change. Years of online innovation and evolution have taken place in a matter of months, as brands were obliged to focus on generating sales from the only channel that remained available: e-commerce. What is expected, however, is that brick-and-mortar shops as we know them today are unlikely to survive once things return to normal. The change is permanent.

The acquisition price of $2.1 billion will be paid entirely in cash by VF, with a clause for an additional payment of up to $300 million upon reaching certain performance milestones after the transaction. As an all-cash transaction, VF will bear the entire risk that the expected synergy value embedded in the acquisition premium will not eventually occur. Since typically an all-cash acquisition is an expression of confidence by the buy-side, it is usually accompanied by signalling effects of undervaluation of the stock price. In fact, the market reacted favourably resulting in a 17% spike of VF shares, nothing less than the biggest intraday gain of the company since Oct. 20, 1987. This type of acquisition is also an indication of the solid liquidity of VF. The table below shows the expected cash evolution of VF for the fiscal year 2021.

The company demonstrates sufficient liquidity and flexibility to operate during the disruptions caused by the recent health crisis, also facilitated by VF’s $2.25 billion senior unsecured revolving credit facility granted in response to the pandemic. In terms of valuation, VF executives expect a multiple of less than 15x EV/EBITDA (implying around $140 in TTM EBITDA for Supreme), similar to the 13.5x EV/EBITDA estimated for Stone Island after the closing of the deal with Moncler.

One of the major potential downsides with respect to the future of the target lies in the preservation of a business model focused on scarcity and exclusivity. VF executives have already expressed the intention to expand the physical presence of Supreme to meet demand in new territories. The question now lies in whether the concepts of scarcity and growth are mutually exclusive or whether they can coexist beneficially. The most delicate issue that VF executives need to address is thus trying to scale the Supreme’s brand without killing its coolness factor. We have reason to believe this will be the case due to two major factors:

To address this concern, Jebbia already stated in the past that expansion does not necessarily mean Supreme is going to mass market. It must also be stressed that this acquisition comes with important potential upsides for both sides. VF manages to get its hands on one of the most resilient brands of recent times, with a DTC channel that resulted to be pandemic proof, while Supreme gets access to best-in-class know how and the possibility to exploit VF’s presence all around the globe. The buy-side aims to scale the Supreme’s operations in new lucrative areas without altering its identity, and China appears to be a ready market. The Chinese fashion market is growing steadily and is expected to continue its expansion at an annual rate (CAGR 2020-2025) of 9.8%. When it comes to streetwear, Chinese citizens seem to have found in its anti-establishment form an unparalleled form of expression. As a consequence, streetwear in China has boomed in recent years, with consumer spending reaching almost 4x more than non-streetwear over the last 5-year period. Considering that Asian consumers have the highest average spend per streetwear product (20% of Chinese respondents to a Strategy& survey are in the $300-500 range) and that VF is already positioned in such a market, we see Supreme’s expansion to China as the most natural development.

Mattia Lamonaca is studying Economics in the Bachelor’s program of the University of St. Gallen. He’s a student of the Swiss Study Foundation. This article reflects the personal opinion of the author and do not necessarily represent the opinion of the Swiss Study Foundation. The article was already published on the SGFER-website, co-founded by Mattia Lamonaca: www.sgfer.org