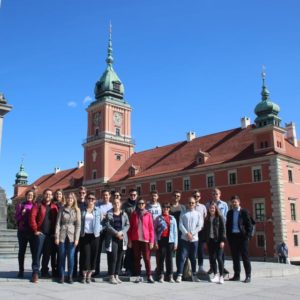 When we hear about Poland in Swiss media, it is often prompted by controversial bills on LGBT rights, worrying juridical reforms or the deteriorating relations with the European Union. Less often do we hear about Poland’s impressive economic growth – Poland was the only EU country avoiding recession during the financial crisis – that had rapidly taken the nation from a Soviet satellite state to a modern European country. Even less still do we hear about cultural aspects of Polish life: its art scene, literature or culinary gems (pierogi, yes, but there is more).

During our eight days in Cracow and Warsaw, we had the chance to talk to journalists, judges, professors, activists, students. We visited churches, companies, monuments, museums, NGOs. While the above mentioned topics regarding minority rights, rule of law and democracy did – alongside with Swiss-Polish bilateral relations – catch the most of our attention during the trip, we were also eager to absorb some of the cultural life in Poland.

Trying to better understand issues in today’s Poland, we have turned to Poland’s history and the way it is being worked through nowadays. There is no doubt that Poland has suffered immensely during the last centuries, as it was often caught in the crossfire of powerful players on its Western and Eastern borders and even disappeared from the map on multiple occasions. Still, walking through the picturesque old town of Cracow, we were surprised by the degree to which our tour guide stressed the role of Poland as history’s favorite victim. For example, the repeated mentioning of Polish treasures being stolen by the Swedes and similar historical anecdotes left us speculating whether Poland ever stole treasures from other countries as well. Another revealing symptom of Poland’s difficult relationship with its past is the so-called Holocaust bill, signed into law in 2018, which makes it punishable to “publicly and untruthfully” talk about any involvement of Poles in the crimes committed by the Nazis. Independently of this ongoing debate, as the main site of the holocaust, Poland’s history will be forever linked with it. On a rainy Sunday, we were given a tour through the concentration camp Auschwitz I and the concentration and extermination camp Auschwitz II-Birkenau. While our guide gave his best to provide background and facts for us to fully grasp the horror of the camps, words will hardly be accurate in describing these sites and the effect that visiting them had on each one of us. Although in theory we knew this before, standing between the few remaining barracks of Birkenau, looking at the train rails where up to 30’000 mainly Jewish people would be brought into the camps daily, we comprehended in an almost physical way the perfidious industrial scale of the Nazi’s killing during the holocaust.

Such a dense and complicated history leaves traces, and it bears consequences up until today. After the fall of the Soviet Union, Poland had to rebuild its political and judicial system almost from scratch. And as we could establish on several occasions, this is still an ongoing process, and certainly not an unproblematic one. Recent reforms of the judiciary, which resulted in a decrease in judicial independence, are being criticised by a wide range of groups, spanning from NGOs and associations over scholars and students to the civil society. At the forefront of this fierce opposition against the right-wing government stands a former Justice of the Polish Constitutional Tribunal whom we had the chance to meet. “Look out of the window and you will behold a quiet country: people walk on the streets, drink coffee, eat out. But under the surface, fundamental changes are ongoing which strongly diminish the independence of the judiciary”, he told us one afternoon at our Hotel in Warsaw. “Law and Justice Party politicians control the government and leverage their power to undermine the rule of law in Poland”, confirmed two young Poles a few hours later. Just like the rest of the students we met, they are part of a student association focussing on the protection of human rights in the country. While some of them study abroad, the determination to improve the situation in their beloved country could be felt in each one of them.

However, the independence of the judiciary is not the only issue liberal Poles are passionate about. A main concern for many is the situation of the LGBT community and their civil rights. Having walked up five flights of stairs in an old building that has seen better days, we were welcomed in the headquarters of the Warsaw-based Helsinki Foundation to gain more insight into the issue. The foundation, among other things, offers protection to individuals in legal disputes involving discrimination and LGBT rights. “Entire regions of Poland have signed resolutions declaring themselves as «LGBT-free zones»”, told us one senior employee of the organisation. This is only one example of discrimination in a country whose ruling party defines the “LGBT ideology” as a plague. Yet in spite, or perhaps because of this, the support for civil rights is very visible in Cracow and Warsaw. Rainbow flags can be seen on the balconies of every other block, and those who fight for equal treatment and civil liberties do so with resilience and determination.

Finally, with the rich program of the trip being put together and organized by Vincent Barras, alumnus of the Swiss Study Foundation and stagiaire diplomatique at the Swiss embassy in Poland, we were lucky enough to gain first-hand insights in the bilateral relations between Poland and Switzerland. Starting off with a closer look at the economic ties between the two countries, we visited the research and business service facilities of Swiss-Swedish multinational ABB. On the same day still, we discussed the economic relations with the heads of the Swiss Chamber of Commerce and the Swiss Business Hub in Poland. Since Poland is often cited in Swiss media as a country where domestic firms outsource their activities to, a recurring topic in these discussions were the involved trade-offs as well as the factors making Poland an attractive country for such firms. Complementing the economic perspective with a more political one, our group has been invited for dinner at Swiss Ambassador Jürg Burri’s residence, where we had the opportunity to exchange with Swiss diplomats and the embassy’s staff. Generously, they have not only answered our most pressing questions on Swiss-Polish relations (such as the planned second round of Switzerland’s cohesion contribution for the “new” EU member states), but even our inquiries about the personal and professional implications of a career within the diplomatic service.

It would be presumptuous of us to think that after such a study trip, we are now able to fully understand the complex issues shaping Poland’s current political and societal landscape. Still, the multifaceted program has allowed us to deepen our understanding of many of the different dimensions of these topics. This has only been possible because all the people we met – be they diplomats, activists, professors, politicians or students – have shown an incredible level of openness towards us. The more time we spent in Poland, the more this variety of voices has started to form a larger picture for us to grasp. A picture with hidden beauties and fascinating contradictions. To all these people – as well as to Vincent and Sarah who organized the trip – we want to send a warm Dziękuję.