In the Philippines, the exponential growth in the amount of single-use plastic packages and items has, to a large extent, led to plastic pollution contributing to serious environmental threats such as flooding. In order to effectively tackle the severe issue of plastic pollution, there is a need to integrate politics, the economy and society, as well as different approaches from both producers and consumers. This blogpost gives an overview of the initiatives which, apart from those working towards a more efficient waste management system, have been launched to discuss and limit the production and use of (mostly single-use) plastic. 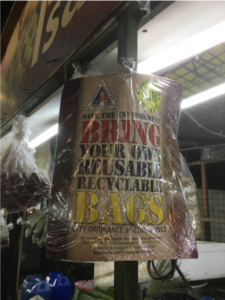 Non-governmental organizations (NGOs) are important players in the pollution issue. Their actions mainly concentrate on raising awareness, undertaking concrete local actions, and influencing legislative processes. Given the economic, geographic, and social disparities between the different areas of the Philippines, NGOs adapt their approaches to the demographics of the country. In poorer regions, the Mother Earth Foundation’s local actions focus on house-to-house information and education campaigns to teach people ways to achieve Zero Waste at home. In more developed areas, the World Wildlife Fund (WWF) organizes online campaigns and petitions. Specific projects undertaken by NGOs bring together many stakeholders at the same time. For example, the International Coastal Cleanup has mobilized 450 volunteers to participate in coastal clean-up actions on four sites in the Philippines. In order to maximize their influence, NGOs strive after presence on the political level. In the Philippines, the WWF calls on the government to introduce a national, legally-binding agreement to stop plastic pollution and is collecting 1’000’000 signatures.

In the absence of national policies on plastic, local and regional governments have stepped in. They have been using data from waste assessments and brand audits gathered by NGOs such as the Mother Earth Foundation in their policy processes. Currently, more than 20 places around the Philippines have taken the initiative to impose bans and other regulations on different single-use plastic items. In Siquijor, a provincial ordinance [1] regulates the use of plastic bags and prohibits the sale and use of styrofoam and other disposable containers. According to observers, even tourists are complying with this ordinance. Similar measures were taken by San Carlos City [2], which goes one step further by encouraging the use of alternative packaging materials such as organic packaging (e.g. banana leaves) and woven bags (bayong). As a third example, the city of San Fernando in Pampanga issued a plastic-free ordinance [3] and became a Zero Waste model in the Philippines. Before implementing new regulations, multi-stakeholder consultations with retailers, institutions, and the general public were held, and the implementation process was road-tested in order to foster public awareness and support.

Although one can observe plenty of initiatives on a local level, there is still no comprehensive national policy to regulate plastic usage in the Philippines. If policies on certain forms of plastic are not introduced on a national level, several problems arise for cities and municipalities aiming to reduce or regulate plastic usage: People get around the regulations easily or simply shift from one kind of plastic to another. In order to effectively tackle the problem, there is a need for a regulatory or legislative framework on a national level. In this context, two proposed bills in parliament are worth mentioning: One on the ban of plastic straws and stirrers [4] and another one on the complete ban of plastic bags [5]. Up to this day, however, both bills are still pending.

On a global level, there has been a rapid proliferation in policies implementing bans or levies on specific plastic products such as lightweight bags or microbeads. In various countries, levies on plastic bags have proven successful in reducing plastic waste drastically (e.g. 90% associated with a €0.15 levy in Ireland) [6]. However, research in Malaysia has shown that despite of raised awareness concerning plastic pollution, these policies do not have a significant impact on consumers: When it comes to a general environmentally friendly behavior, there is no change in habits [7]. Furthermore, a shift towards increased garbage bag consumption has been witnessed due to the common reuse of plastic shopping bags as such. Thus, counterintuitively, plastic use is not always reduced as expected. At the same time, bans and levies on plastic allow for its substitution with alternative products, which may represent an opportunity for the industry [8]. Moreover, private businesses tend to recur to the rhetoric of corporate social responsibility (e.g. Nestlé Philippines’s May Balik! Sa Plastik! programme) in order to enhance brand value and increase manufacturing efficiency [9].

In order to understand the rationale behind regulations regarding plastic use, proper education is needed. Thus, occasional discussions regarding the Three Rs (Reduce, Reuse, Recycle) in the classroom during science period are not sufficient. Schools should go further than eco-brick collections or recycling competitions by focusing on finding long-term solutions. To actually trigger a lifestyle change, advocates and researchers recommend teaching students about environmental issues both in- and outside of the classroom. For instance, the first Green School programme in the Philippines was launched at Imus National High School earlier this year. Apart from having a green curriculum, Imus National is expected to develop in-school systems that allow students to practice direct reuse and landfill waste reduction. Higher education institutions have yet to realize their potential to initiate discussions through research and conferences, to outreach, and to be model communities to the broader national community (e.g. Ateneo and Silliman University are working towards the ban of single-use plastic on campus).

In conclusion, the initiatives and policies discussed above alone will not suffice in order to tackle plastic pollution in the Philippines: Only a holistic approach can be successful. In addition to finding more efficient waste management solutions, it should be the foremost aim to reduce plastic consumption at its source by both research-based proscription targeting consumer behavior and education, as well as raising awareness. In the end, the effort of each and every one of us is needed to fight plastic pollution.