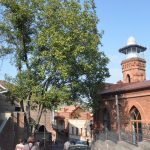 «History, Threats and Opportunities» – these three keywords are certainly closely intertwined in the region known as the South Caucasus. Complicated historical legacies influence the economic,political and societal transformation processes that set in after the collapse of the Soviet Union. The same legacies play into the renewed ethno-territorial conflicts that began in the 1990s, conflicts that themselves have an impact on the ransformation processes in the various countries. The South Caucasus remains, furthermore, a region in which different energy and geopolitical interests collide.

The Swiss Study Foundation (SSF) assembled a group of students to explore these complex relationships in Georgia and Armenia between August 27 and September 6, 2014. This publication presents a selection of the resulting essays.